Dionysus, the God of wine. 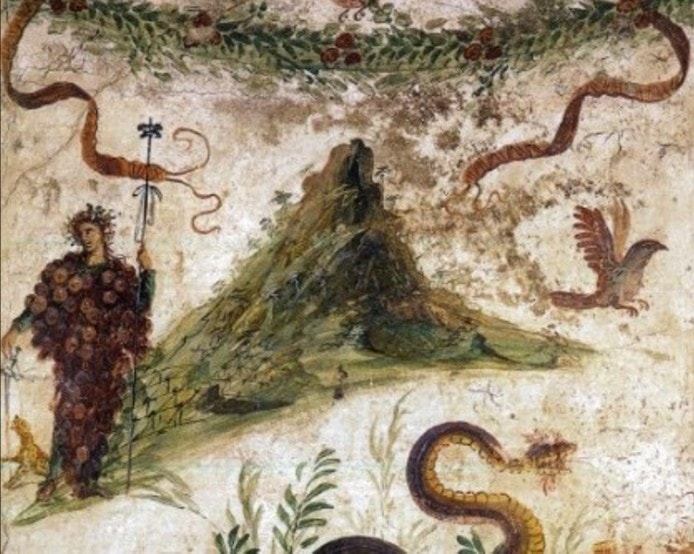 The myth of Dionysus.

For the Greeks Dionysus (Bacchus for the Romans) was the god of wine and ecstasy. According to the most widespread version of the myth, Dionysus was born from the union of Zeus, disguised as a mortal, with Semele, daughter of Cadmus, king of Thebes. Zeus’s wife Hera revealed to Semele, already six months pregnant, the divine nature of her lover. Thus, Semele asked Zeus to reveal himself in his true form.

Zeus refused the request and Semele in response denied him her bed. Then, the furious God unleashed thunder and lightning causing Semele’s death. Hermes managed to save the child by sewing him into the thigh of Zeus himself where he could mature the last three months.

Hera then gave Dionysus to the Titans to get rid of him, who tore him to pieces and boiled the remains. But thanks to the intervention of Zeus’s mother, Rhea, Dionysus regained his life by being born for the second time. Zeus then entrusted him to Persephone who led him to King Athamante. Furthermore, Zeus persuaded Ino, Athamante’s wife, to raise Dionysus in the women’s quarters, disguising him as a girl. But once again Hera discovered the trick and punished the royal couple with madness.

At this point to save the young boy, Hermes, following the instructions of Zeus, transformed him into a kid and took him to the Nymphs on Mount Nisa, in Helicon. Dionysus will spend his youth on the Mount with the Nymphs.

It was here that Dionysus invented the wine that will bring him great fame.

When he reached maturity, Hera had to recognize him as the son of Zeus, despite being effeminate due to the education received. But to punish the fruit of the forbidden love between Zeus and a mortal Hera made him mad.

In adulthood Dionysus began to wander the world accompanied by his tutor Silenus and a group of Satyrs and Maenads, whose weapons were sticks covered with ivy leaves and swords. Wherever he went, he spread joy and terror mixed with euphoria and intoxication which often resulted in violence. Thus he spread the vine in Europe, Asia and Africa.

The so-called triumph of Dionysus consisted in affirming the superiority of wine over any other intoxicating drink.

Dionysus and the Vesuvius wine.

Not everyone knows that Dionysus turns out to have also been one of the most venerated deities on the slopes of Vesuvius. In these lands, populated for thousands of years, the Greeks had already brought their own cult and traditions. In fact, the origins of the wine produced on the volcano of Naples, the Lacryma Christi of Vesuvius, are lost in the mists of time. This millenary winemaking tradition has even survived the eruptions of Vesuvius which over the centuries have affected this land. Also, and above all, to the last catastrophic eruption of 79 AD. in which Vesuvius buried the Roman cities of Pompeii and Herculaneum.

Dionysus, or Bacchus (God of wine according to Roman mythology), has been repeatedly associated with the name of the sacred Vesuvian wine.
One of the most famous depictions of Dionysus is found inside the beautiful Villa of the Mysteries in Pompeii, where you can recognize the representation of a Dionysian initiation scene with drunk Dionysus, sitting in the arms of Ariadne. Also in Pompeii, inside the Lararium of the Centenary House, we find the God represented dressed in a bunch of grapes in front of a mountainous relief covered with vineyards. This relief has been identified with Vesuvius. Hence the strong connection between Dionysus and Vesuvius.

A difficult reconstruction since the descriptions of the volcano before 79 AD. they are uncertain and fragmentary. Strabo, Frontinus, Plutarch and Dio Cassius, describe Vesuvius actually similar to how it is represented in Pompeian paintings. Vesuvius had a different aspect before 79 AD; its mouth, in fact, had a much more similar shape to that of Monte Somma today.

In this sense, the representation of the volcano in the Pompeian fresco is likely and would confirm the relationship with the divinity. Furthermore, Dionysus is depicted differently from the classical iconography which would see him with a vine crown that surrounds his head and with a bunch of grapes in his hands. It could therefore be an original creation.

Vesuvius and Dionysus in Martial’s texts.

Vesuvius and Dionysus in Martial’s texts. The connection between Dionysus and Vesuvius would have arisen from the intense wine production on its slopes, substantiated by a religious feeling for which the volcano becomes a manifestation of God himself.

In this regard, there is an epigram by Martial (IV, 44) composed eight years after the catastrophic eruption of 79 that destroyed Herculaneum and Pompeii:

“Here is Vesuvius, which yesterday was still green with the shadows of vine leaves: here the famous grape squeezed from the press, had filled the vats. This dewlap Bacchus loved more than the hills of Nisa; on this mountain yesterday the Satyrs still performed the round trip. Here was the city of Venus, which she liked more than Sparta; here was the city that repeated the glory of Hercules in its name. Everything lies submerged in flames and dark ashes: the gods would have liked that such a mess had not been allowed to them “.

The scholar G. F. De Simone believes, in the light of this text by Martial and the various temples dedicated to him, scattered at the foot of the volcano, that Dionysus was the “patron” of the Vesuvian territory.

Ambrosio, the sacred wine of Vesuvius.

Beyond the possible interpretations that we can give to the frescoes or to the ancient literary sources, we like to think that Dionysus was the protector and symbol of the fertility and abundance of this territory.

Sons of Vesuvius and custodians of a millenary tradition, we still pass on the flavor of history and legend inside Lacrymanera barrels under the protection of Dionysus, the god of wine.

Dionysus, the God of wine.